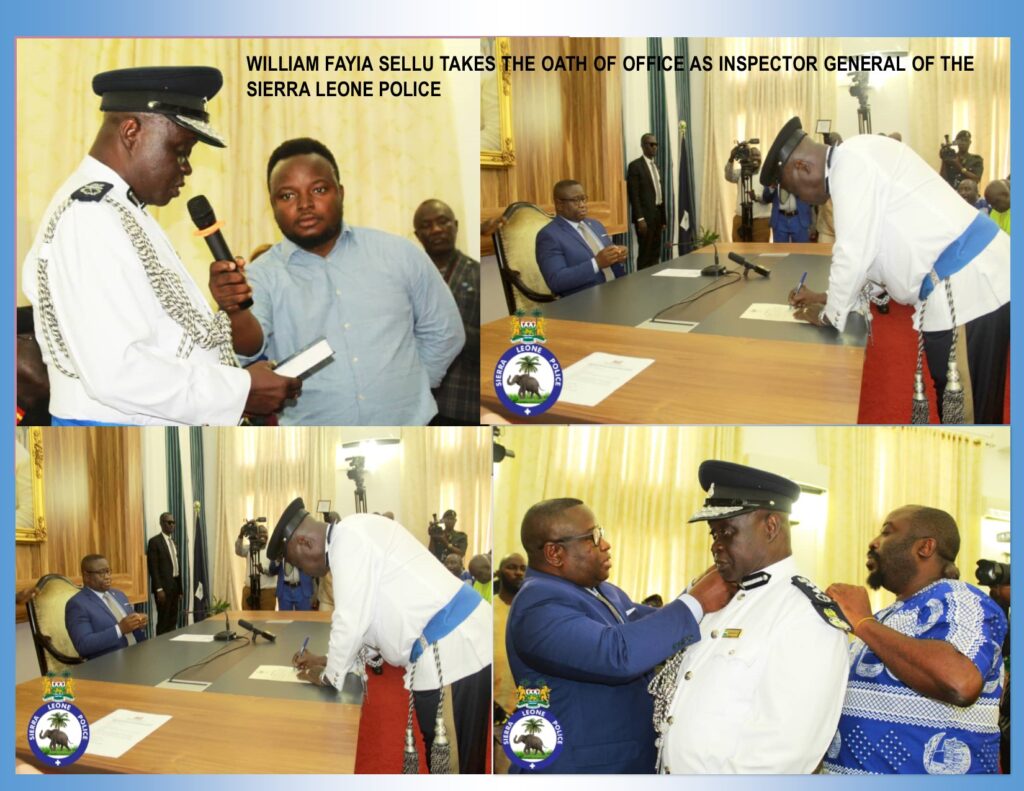 Following his appointment and subsequent approval by the Parliament of Sierra Leone as Inspector General of Police, Mr. William Fayia Sellu has on Monday 22nd August, 2022, taken the oath of office at State House, in Freetown.

The oath was solemnly administered to the Inspector General of Police Mr. William Fayia Sellu by the Secretary to the President – Dr. Julius Sandi.

After formally signing the oath form, the Inspector General of Police was then decorated by His Excellency the President – Brigadier Retired Dr. Julius Maada Bio, who congratulated IGP Sellu on his new appointment to lead the Sierra Leone Police.

The President noted that IGP Fayia Sellu has an herculean task to lead the Police; owing to the growing trend and overlapping issues of security-related threats and also fighting crimes in our respective communities.

The President stressed that he had no doubt in the leadership of Mr. Fayia Sellu and expressed his trust that he will live up to expectation and be able to surmount such herculean tasks.

H.E furthered that keeping the peace in Sierra Leone, as of now, is challenging, based on the fact that some groups of people always bank on inciting others to cause mayhem in society. He assured the Police that all those who were responsible for the brutal deaths of the six Police personnel, whilst in the execution of their lawful duties on Wednesday 10th August, 2022, will be brought to book, as provided for by law.

He however wished Mr. Sellu the best of luck in his new assignment, as Inspector General of Police.

Responding, Mr. Sellu expressed profound thanks and appreciation to President Julius Maada Bio for the confidence reposed in him to serve in the capacity of Inspector General of Police.

He pledged his commitment to upholding the core values and functions of the Sierra Leone Police and further promised to provide the right leadership for the organization. Adding, that he will work closely with other colleagues in the security sector so as to contribute his fair share to the peace and security of the country.

He thanked his senior brother – Brigadier Dr. Sahr Foday and his lovely wife – Mrs. Maltida Doris Sellu for standing by him through thick and thin.

He finally craved on the indulgence and support of his colleague senior officers, friends, and well-wishers to embrace teamwork and to help in his quest to change the narrative of the organization.