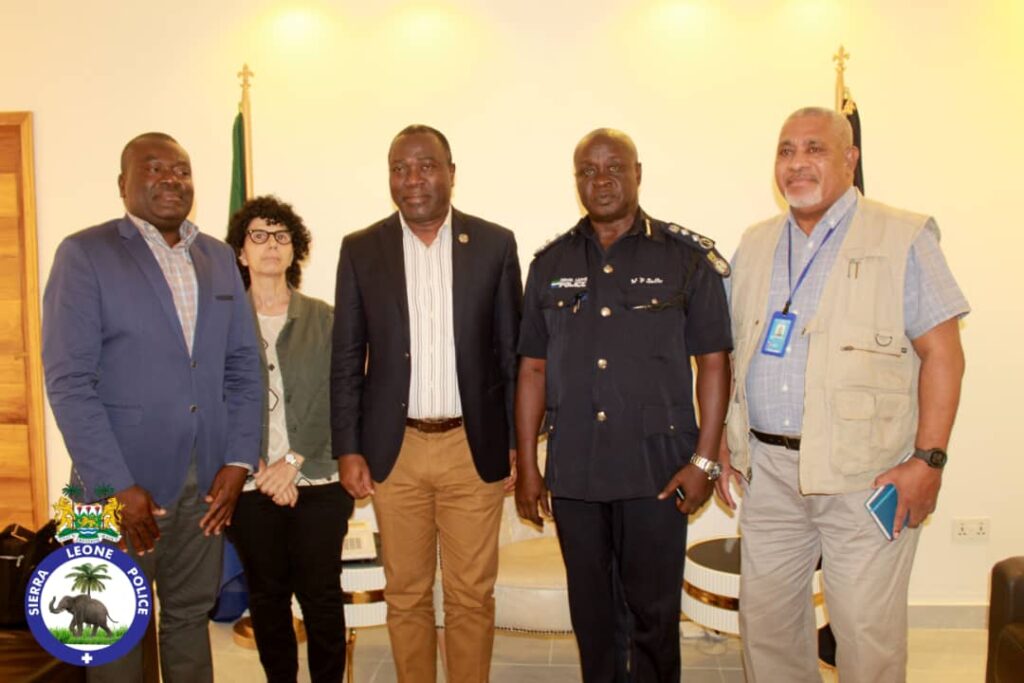 In his presentation, the Resident Coordinator congratulated the IGP on his appointment and wasted no time in extending condolences to the IGP and bereaved families of the six (6) Police Officers killed during the August 10, insurrection.

He extensively and exhaustively dilated on the sustainable development goals, the August 10 incident, the arrested suspects, access to their legal teams and relatives, capacity building for the Police to respond in situation of public disorder, emphasis on communication in policing activities, coordination with other donor partners and for the SLP to operate with the understanding that effective policing is compatible to human rights standards.

He further maintained that the UN had invested a lot in the SLP, in terms of security reforms.

Dr. Ahonsi equally referenced the high-level interactions that are presently ongoing between UNDP, UNICEF and the SLP.

According to him, the August 10 incident should be considered as lessons learnt for improving on the work of the Police.

He also spoke about people in detention, whom he said, have not been accorded legal representation, civilian corpses yet to be released to their relatives, and concerns about who to release and who should not be released.

In conclusion, he commended the Police for the critical role they play in society in terms and of the provision of security and enhancing safety for UN staff, including high level personnel of the UN in Sierra Leone.

He entreated the IGP and the Police family to maintain a harmonious relationship between the Police and the UN, with the view to mapping out strategies on how to forestall a similar situation of August 10 in future; where, he said, that children who are involved in violent demonstrations end up being kept in police detentions rather than focusing on their education.

He thanked the Police, the government and the people of Sierra Leone for maintaining the peace and looked forward to working with donor partners on how to enhance a better life for disadvantaged Sierra Leoneans.

In response, the IGP welcomed the UN Resident Coordinator and team for the engagement.

He spoke on the August 10 incident and described it as not a peaceful demonstration but a violent protest that had led to the killings of Police officers and civilians, destruction to police property, looting and burning of government property, and Police stations.

He referenced the Public Order Act of 1965 that calls for permission to be sought from the IGP before staging any demonstration in Sierra Leone.

He stressed that the August 10 incident was a faceless one; as no body applied or showed up to the Police, to request for clearance to stage a protest. He said that the Police only got threats of the pending demonstration on social media, and which turned out to be very violent in nature.

He also extensively spoke on arrests made during and after the violent protests/riots, the release of juveniles to the Ministry of Social Welfare and Don Bosco; of which, he said, the children had re-united with their parents, the multiple ongoing investigations ranging from cyber, murder, looting, destruction to police stations and government buses, larceny, riotous conduct, incitement, to financiers of the entire episode.

He furthered that thirty (30) corpses are still in the mortuary, of which eighteen (18) of them had been identified by their relatives; and that postmortem would soon be conducted on them.

He also spoke about the arrest of some individuals who were suspected to be involved in the killing of the six Police officers, and also suspects who had already been released due to lack of evidence.

The IGP however assured the UN Resident Coordinator and team of a speedy, fair and independent investigations. Adding, that the rights of suspects in police custody were respected and continued to be respected by the Police, as their relatives and lawyers are allowed to visit them regularly.

The IGP further highlighted numerous challenges faced by the Sierra Leone Police, especially in the areas of mobility, logistics, and personnel’s strength; given the fact that the country is approaching the general electioneering period. He noted that voters’ registration exercises had already commenced nationwide.

He appealed for election specific trainings for the Police and other members of the security sector; noting that the Police alone would not have the capacity in terms of personnel’s deployment, to cover all proposed 25,000 polling stations countrywide.

IG Sellu expressed his intention to rollout training packages for the Police between now and January 2023.

The Police, he said, had made tremendous strides in setting up a radio station but however noted the difficulty in securing an allocated frequency to operate.

The radio station, he said, will not only be used by the Police but the entire security sector in Sierra Leone, he concluded.