THE IGP JOINS HUMAN RIGHT ACTIVISTS TO PROPAGATE THE THEME: “ENDING THE CULTURE OF RAPE IN SIERRA LEONE” 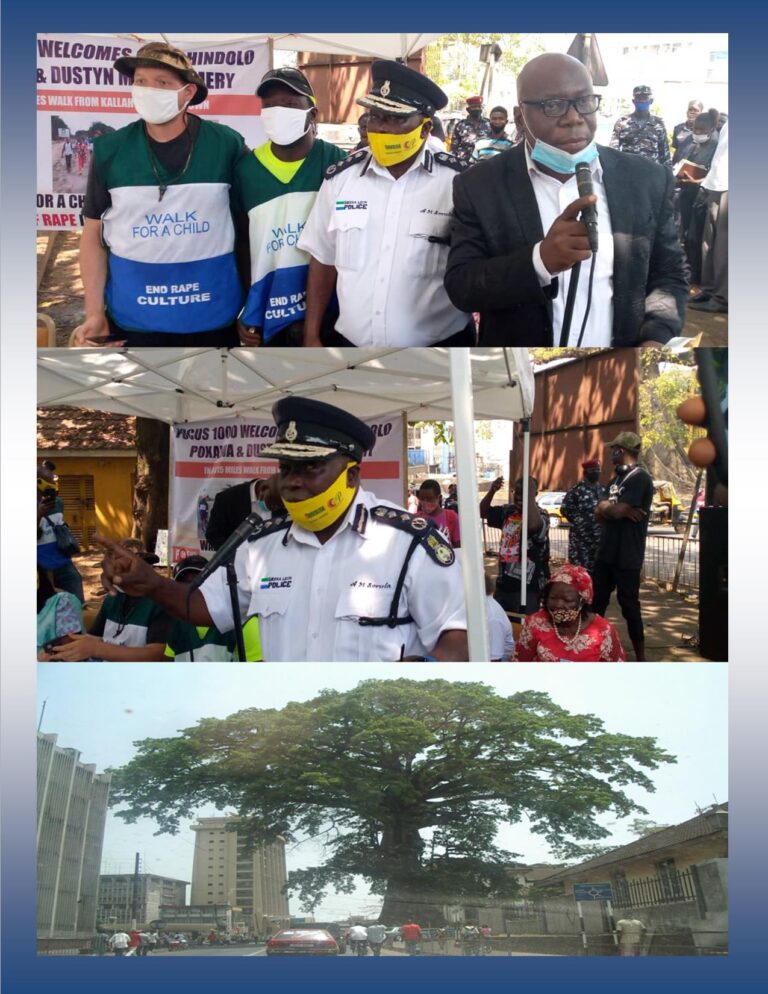 In an occasion held at the monumental COTTON TREE of Sierra Leone on Wednesday 27th January 2021, the Inspector General of Police (IGP) Dr. Ambrose Michael Sovula joined a group of Human rights activists to further propagate the message about ending the culture of rape in Sierra Leone.

The IGP graced the occasion not only as guest speaker but as a personality that frowns at the menace and as a leader of an institution that is mandated to investigate and prosecute perpetrators of the heinous crime. The IGP’s passion to end or mitigate rape and Sexual Gender Based Violence (SGBV) in Sierra Leone had always been his goal prior and after his appointment as leader of the SLP. While delivering his speech as a guest speaker, the IGP highlighted; “Sierra Leone is among nations of civilized people, who are bound by both national and international best practices. Rape, the world over, is considered a very grave offence. And Sierra Leone is no exception. It is the act of engaging in sexual intercourse with another by the application of force, fraud, or fear. In other words, it is an act of sexual intercourse with another without his or her consent. With a view to ending or mitigating rape, the Parliament of Sierra Leone passed into law the Sexual Offences Amendment Act 2019. This Act makes it undesirable for perpetrators who commit rape or sexual penetration because of the stiffer punishment attached to it. But yet still, people do commit rape or sexual violence”, He noted.

“The Sierra Leone Police also acted tough by adopting a two-pronged approach: soft policing and hard policing. On a softer note, we empowered the Community Relations Department and Family Support Unit to engage in massive sensitizations and community engagements, with the view to raise more awareness about sexual and gender-based violence, and the need to report same to the Police. On the other front, we created a syndicate within the Family Support Unit known as Sexual Assault Syndicate – SAS, for short. This syndicate was and still tasked with the responsibility to fast-track investigations of sexual violence”, the IGP added.

While concluding, the IGP disclosed that the SLP had signed MoUs with several feminists, child advocacies and Human Rights organizations in Sierra Leone in a bid to collaborate and to enhance the Family Support Unit of the Sierra Leone Police in the fight against rape and other related sexual offences. “The result of such collaboration is glaring. More people are now reporting cases of sexual violence because of the confidence they have in the SLP. Secondly, more institutions continue to partner and work with the Police in fighting rape and Sexual Gender Based Violence (SGBV) in Sierra Leone”, he concluded.