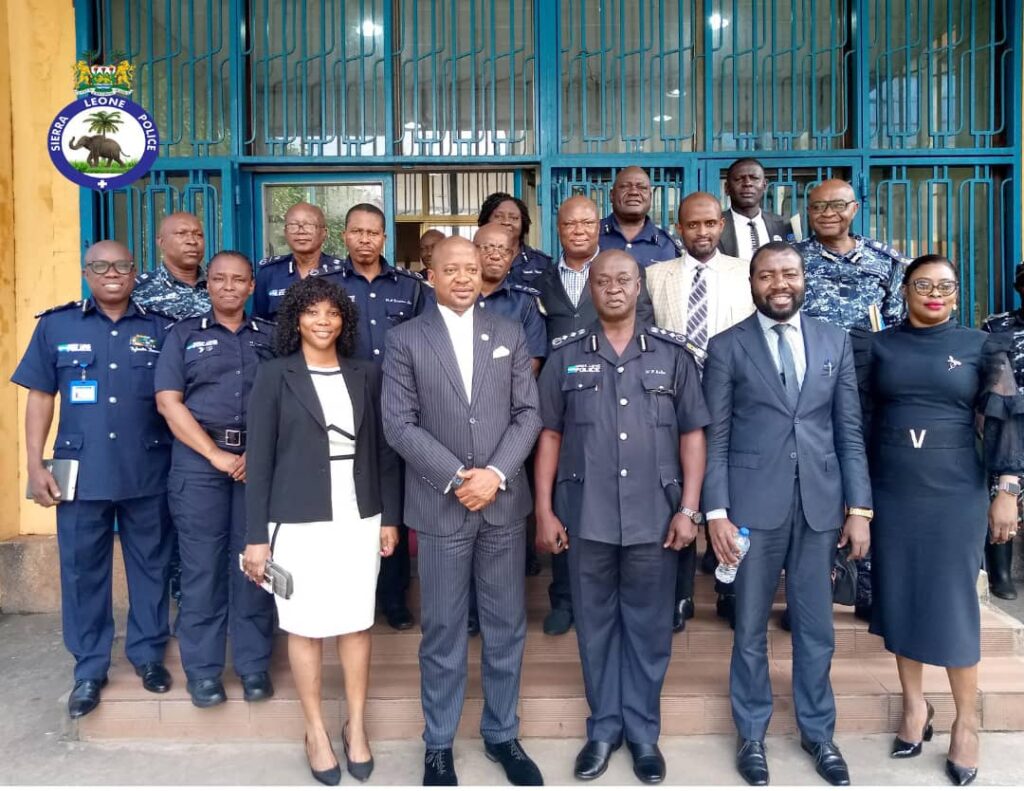 As a means of promoting institutional synergy and collaboration between the two institutions, the Ombudsman of Sierra Leone – Jenkins Johnson Esq. and his team, on Wednesday 28th September 2022, paid a courtesy call on the Inspector General of Police – Mr. William Fayia Sellu, at Police Headquarters, George Street, in Freetown.

The initiative of the visit was centred on building a good working relationship between the Sierra Leone Police (SLP) and the Office of the Ombudsman. The Ombudsman also used the occasion to formally congratulate Mr. William Fayia Sellu on his appointment to the office of Inspector General.

Jenkins Johnson Esq. further used the opportunity to hobnob with the general membership of the Executive Management Board inclusive of Regional Commanders in the Conference Room and via zoom respectively.

Mr. Jenkins Johnson gave a synopsis of the role and responsibility of the Office of Ombudsman, as enshrined in Section 7 of the Ombudsman Act; noting, that the Ombudsman is the people’s spokesman.

He revealed that many Police Officers had appealed through the Ombudsman’s Office against decisions that were taken against them in the SLP; but that with the intervention of the Ombudsman, some of those issues were judiciously addressed.

However, the Ombudsman drew the attention of the Inspector General of Police and the Executive Management Boarder to issues of police bail, detention facilities at police stations and the relationship between the Police and the citizens.

He emphasized that the IGP and the Executive Management Board need to smoothen the relationship between the citizens and the Police. In his words, he said:

“I believe in the leadership of IG Sellu and have no doubt that he can change the narrative for the betterment of the Organisation; as the Ombudsman is a policy assurance for all and sundry”.

Responding, the Inspector General of Police – Mr. William Fayia Sellu thanked Jenkins Johnson Esq. and the team for such a maiden visit which culminated to a kind of worthwhile lecture delivered to the EMB members.

He furthered that most of the issues highlighted were not new, though some, he said, will be used as management information for future planning.

As regards strengthening the relationship between the two institutions, the Director of Professional Standards – AIG K.S Kamara was considered to serve as a liaison for effective administration.

AIG Thomas M. Lahai, AIG Mohamed Braima-Jah, AIG Saidu B Jalloh and AIG Memunatu Konteh-Jalloh also made meaningful contributions to some of the issues expressed by the Ombudsman and team.

There is no denying the fact that there are lots of oversight bodies that regulate the Police; but disappointingly, most of these bodies always indict the SLP instead of condemning any wrongdoing meted against the Police by some members of the public.

Regional Police Commanders in the provinces also made similar contributions bordering on some of the complaints made to the Ombudsman Office, such as unfair treatment based on the fact that the Office does not fully understand some of the constraints the organisation faces while executing its duties.

Meanwhile, the Inspector General of Police reassured the Ombudsman and team of his maximum support at all times and expressed the hope that there would be follow-up meetings for better collaboration.