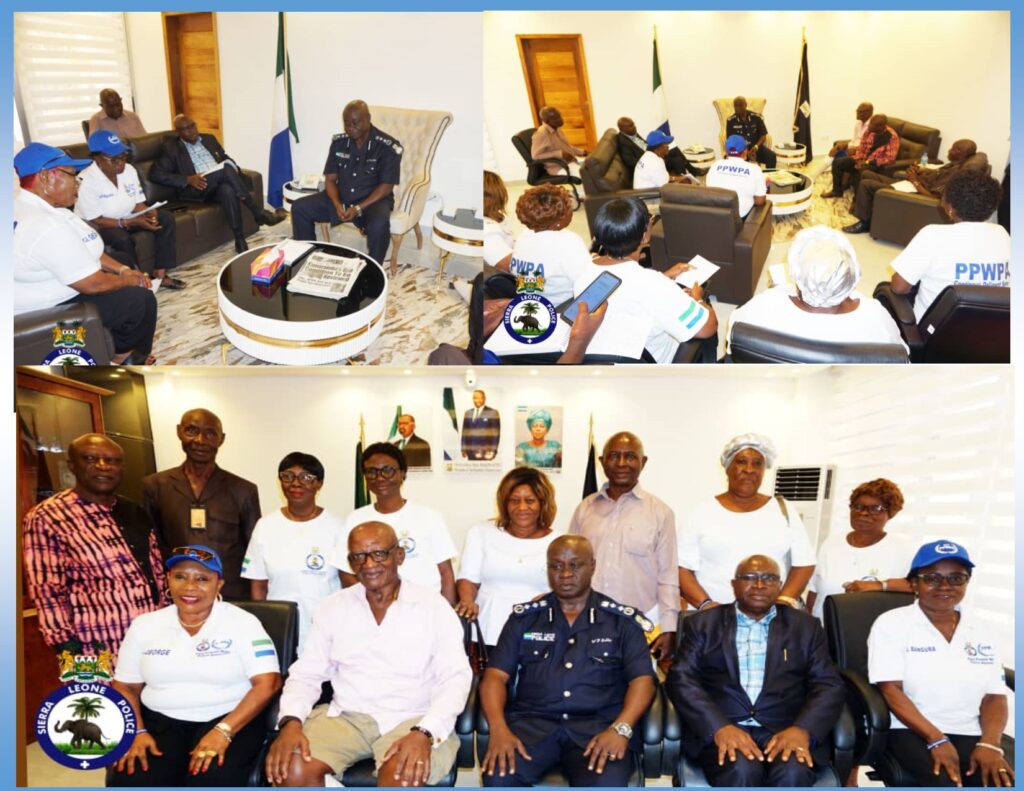 On Tuesday 13th September, 2022, a cross section of members of the Retired Police Officers Association otherwise known as Re-POA paid a courtesy call on the Inspector General of Police – Mr. William Fayia Sellu in his office at Police Headquarters, George Street, in Freetown.

According to the Secretary General of the Association – Rtd. Superintendent Sanie Sesay, the Retired Police Officers Association is a representative of all retirees in the SLP.

He noted that the Association was formed in July 2021, upon the approval of the former IGP – Mr. Ambrose Michael Sovula and members of the Executive Management Board.

Among its many objectives are: providing assistance to the Sierra Leone Police in areas of training, investigations, information gathering, dissemination, addressing the welfare needs of retirees in terms of sickness and helping with employment, where available.

Delivering a statement, on behalf of the Association, the Chairman – Retired AIG Christopher John stated that the main purpose of their visit was to congratulate the IGP on his appointment, announce the existence of the Association, and thereby pledged their total support to his leadership and wished that he succeeds in projecting the good image of the SLP.

He expressed optimism that the IGP’s leadership style will make it possible for him to steer the SLP to better heights; as exemplified in his ability to deliver effective and efficient policing services to the people of Sierra Leone, over the years.

Retired AIG Christopher John further noted that one of the most outstanding attributes of IGP Sellu is discipline – a quality, he said, will be useful in restoring and instilling discipline and respect within the rank and file of the Police.

In addendum, Retired AIG Morie Lengor expressed similar sentiments and explained that Re-POA is made up of different factions including the Past and Present Women Police Association – PPWPA and Senior Police Officers Association (SPOA); but that all three groups have the same objectives, which are to foster unity and solidarity amongst Police retirees.

He called on the IGP to help in harmonising the activities and operations of the three groups, so as to ensure effective interface with the police leadership.

Responding, the IGP thanked Re-POA for the recognition and congratulatory message; noting that members of the Association came together because of their passion for policing.

He nevertheless suggested that for the sake of clarity and effective channeling of support to retirees, all three organizations within Re-POA should be collapsed and unified under one umbrella organisation. Adding, that the membership can even choose to operate with or under a different name; but the insistence was that it must be one group representing the whole.

IGP Sellu noted that Re-POA or the new group to be formed should be holistically looking at retirees’ welfare issues.

He mildly rejected the current arrangement of each group fending or catering for its members. He made it clear that he strongly believed in the caliber, knowledge and expertise of the men and women in the Association – a reservoir of knowledge he said the SLP could easily tap into, to improve on the current status of the organisation (SLP).

In closing, he encouraged Re-POA to be prepared to give back to the SLP the knowledge and experiences they acquired during their time of service, for the improvement and betterment of the organisation (SLP).

Retired CSP Aesha Bangura moved the vote of thanks.

Other pleasantries and group photo with retired Police Officers, climaxed the meeting.