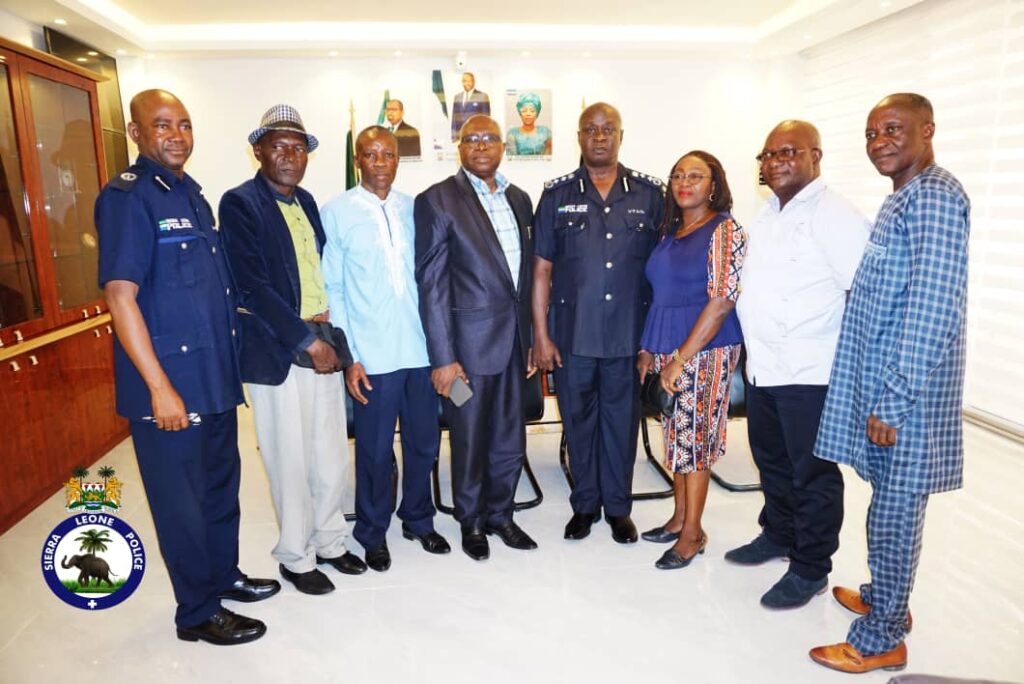 In a bid to foster brotherhood and to continue to identify themselves as one family from the same district, a cross section of the executive of the Kailahun District Descendants Association (KAIDDA), on Tuesday 13th, September 2022, met with the Inspector General – Mr. William Fayia Sellu, at his George Street office at Police Headquarters, in Freetown. The visit was aimed at showcasing their support and appreciation, following his appointment, as Inspector General (IGP), by His Excellency the President.

In his opening statement, the Chairman of KAIDDA – Retired AIG Morie Lengor, on behalf of the membership, congratulated the IGP on his appointment and at the same time extended his heartfelt condolences to the Police and families of Police Officers, who met their demise on August 10, 2022.

Mr. Lengor briefed the IGP about KAIDDA’s activities and stressed that the Association is a non-political group that seeks to unify, promote and improve on the welfare of people in the district.

He continued that the Association has immensely contributed to many other issues, mainly on the humanitarian front. Adding, that significant contributions were also done during the Ebola mudslide, COVID-19, and further engaged in floods mitigation efforts.

Mr. Lengor assured the IGP of their support to the peace and security of the State; and wished him a successful tenure of office.

In closing, the KAIDDA President praised the work of the Regional Commander East – Commissioner Andrew Mustapha Kamara, especially in the area of reducing the number of checkpoints in the district.

The Association’s executive members present then unanimously made the IGP a chief patron of the Association, which he readily accepted.

Activities intended to be executed, according to the executive members, border on Agriculture for the youth in the district.

In response, the IGP expressed his delight and appreciation for the visit and confessed that he was looking forward to receiving the Association, after his appointment.

The IGP equally briefed the executive about his vision for the Police and said that he will prioritise mentorship, capacity building and trainings. And that he will engage donor partners like the British High Commission, the American Embassy and other key partners to help him achieve these.

Mr. William Fayia Sellu said that he is looking forward to visiting the district and therefore called on the Association to take the lead in putting together that arrangement. He noted that the visit to the district will afford him the opportunity to meet with district traditional authorities and relevant stakeholders.

The visit was held in a relaxed, friendly and constructive atmosphere. Taking of photographs climaxed the visit.