He made this disclosure during his visit to the Minister of Internal Affairs, Honorable David Panda-Noah in the conference room of the Ministry of Internal Affairs on Gloucester Street in Freetown. The meeting addressed security related issues including the safe city project on Freetown and for law enforcement agencies or bodies to use the International Criminal Police Organization (INTERPOL) to detect crimes and criminals, identify prevention opportunities and to protect victims of crime from exploitation and victimization among others across the globe.

Dr. Al-Raisi who is the brain behind the use of technology in policing has been at the forefront of the UAE”s commitment to INTERPOL’s priorities. He said Sierra Leone and the United Arab Emirates have long collaborated in several domains, while Sierra Leone has frequently been a key partner to INTERPOL in regional policing operations. Adding that in this age of unusual information exchange, the police the world over are increasingly facing challenges in discharging their duties, as 55 percent of the world’s population are having internet access and criminals are increasingly going after data as a means to make money. He further stated that they would continue to work together until they triumph over crime, terrorism and human trafficking.

He concluded by thanking the Minister of Internal Affairs Honorable David Panda-Noah and team for hosting them, applauding them for their formidable outputs in ensuring that the National Security of the Republic of Sierra Leone is stable and tight. He added that he would look forward to continuing these partnerships in order to strengthen resilience in the regions, and assured of his commitment and support to ensuring that the existing challenges of information and communication in the security sector are addressed.

Responding, the Minister of Internal Affairs Honorable David Panda-Noah thanked Dr. Nasser Al-Raisi of the United Arab Emirates and team on behalf of the President H.E Rtd. Brigadier Dr. Julius Maada Bio for steps taken to promote the Sierra Leone Police (SLP) in accordance with the INTERPOL global databases with their respective national laws and cooperate on cross-border investigations, operations and arrests with this new technology. He said his Ministry is ready and happy to support the work of INTERPOL and there are many needs in the security sector but the lack of fund is a challenge, which is preventing them now, adding that the Sierra Leone Police funding is very low. He furthered that as a security sector, they believe in cooperation. He appreciated the timely visit and support of the UAE, and promised to further communicate with them as they strengthen their collaboration. He continued that they look forward to receiving more support to see the full operation of INTERPOL in the near future.

Welcoming the UAE team, the Deputy Minister of the Ministry of Internal Affairs Honorable Lahai Lawrence Leema said the idea of the new technology system to fast track the work of the police is a great boost to civid-19 pandemic, as the police are key partners in the development of a nation, and their work is crucial and therefore need all round system for efficient service delivery. He further assured the team that the present security situation in Sierra Leone is calm and quiet, whilst appreciating the team on behalf of the government of Sierra Leone for their bilateral support and effort in strengthening the INTERPOL coordinating networks of police and experts in different crime areas. He emphazied that security protocols could not be built alone internally but externally, thanking them for recognising the support in assisting them when they most needed it.

Presenting gifts to the UAE team on behalf of the government of Sierra Leone, the Inspector General of the Sierra Leone Police (SLP) Dr. Ambrose Michael Sovula said he had done thorough consultation with the police organization and therefore declared his support for the UAE candidacy for the presidency of INTERPOL. He said his institution the SLP is willing and ready to collaborate with the UAE government in enhancing a well-protected, conducive and safe environment for citizens and non-citizens. He went on to say that considering the magnitude of the challenge, urgently demands united global action, which he believes INTERPOL, can uniquely facilitate as a neutral and trusted global partner and assured them of their support and cooperation.

On the whole, Dr. Sovula professionally explained management strategy for the safe city project which effectively monitor the entire city, which to a very large extent will serve as a social lens to curb crime and monitor operational activities including the smooth flow of traffic in the Central Business District (CBD), which was championed by their determined Honorable Minister of Internal Affairs Mr. David Panda-Noah. The UAE delegation wholeheartedly appreciated and welcomed the idea of the safe city project. 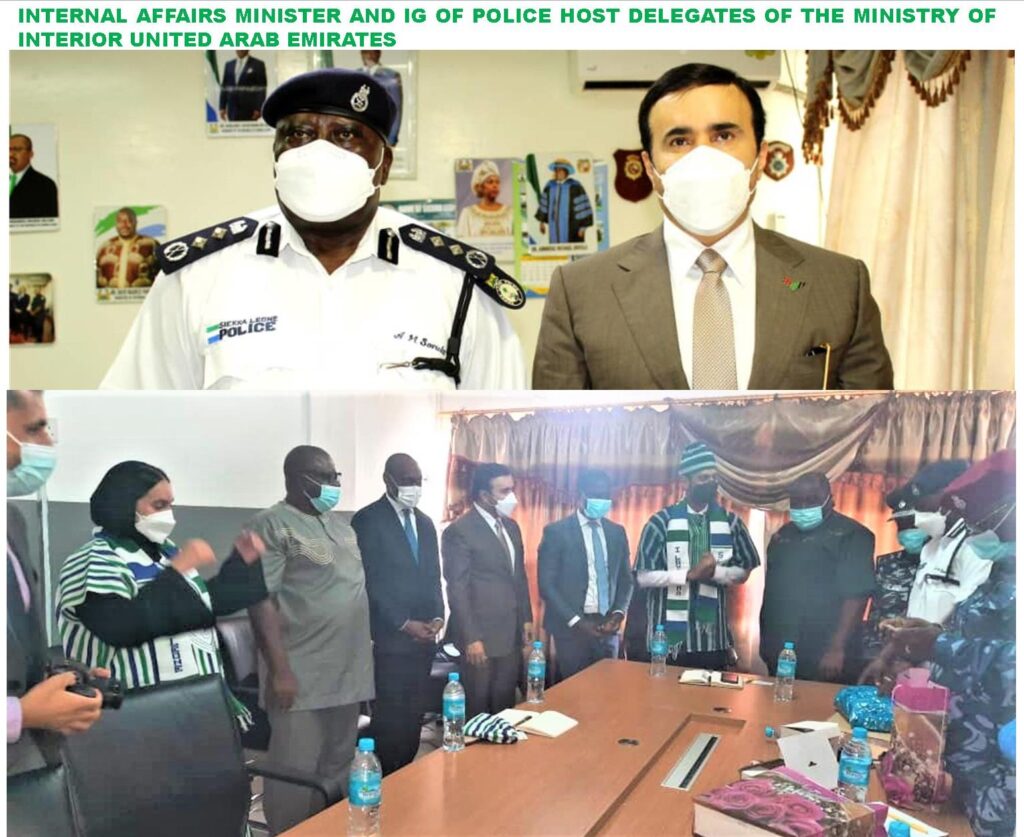