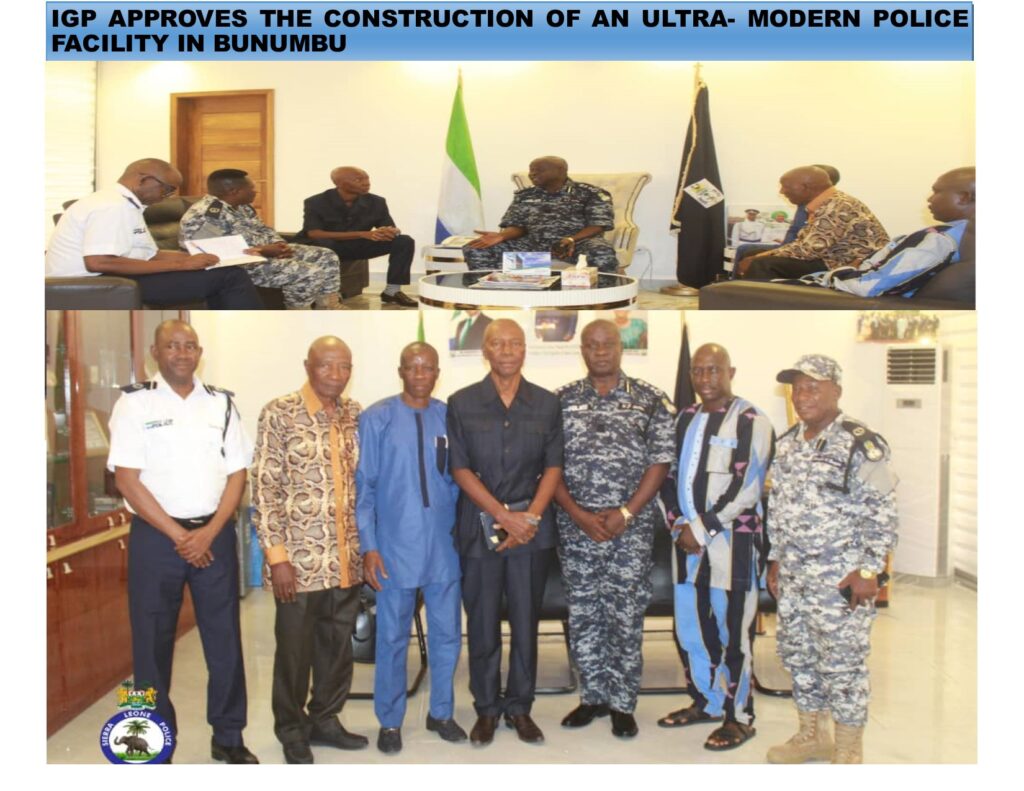 In a meeting held between the Inspector General of Police (IGP) – Mr. William Fayia Sellu and the Paramount Chief (PC) of Pejeh West Chiefdom, Dr. Shamsu, on Thursday January 12, 2023, at Police Headquarters in Freetown, the IGP has granted approval for the construction of an ultra-modern police station in Bunumbu, Peje West Chiefdom, Kailahun District.

The decision to construct an ultra-modern police station came against the backdrop of a project proposal submitted by PC Dr. Shamsu to reconstruct the Eastern Technical University, formerly called the Bunumbu Teachers’ College to a modern learning facility. He said that if things went as planned, the University would be hosting over two thousand (2000) students and that would naturally require high Police presence. He noted that the anticipated high police presence is what precipitated the idea to construct a modern police station at Bunumbu, after already acquiring three (3) acres of land for this purpose.

PC Dr. Shamsu assured the Inspector General of Police that funds have already been solicited and that the only move that is required of the IGP is his endorsement of the project proposal and his willingness to deploy more personnel after the construction of the police station. He added that by February this year, he will provide two (2) dwelling houses which will be used to host more Police Officers.

The Paramount Chief is anticipating an increased crime rate given on-going constructions. It is on this note that he has decided to be proactive by ensuring the bolstering of the strength of the Police in his Chiefdom before the full commencement of the construction projects.

Without wasting time, IGP Sellu endorsed the project proposal and pledged to offer his fullest support to its attainment. He then urged the Paramount Chief to provide him with a rented house within the Bunumbu Township so that he could initiate emergency transfer of more personnel to reinforce the already deployed personnel at the Bunumbu Police Post. The additional personnel, he said, will then be policing the construction project as well as the forthcoming multi-tier elections.

“After the construction of the ultra-modern police station, I am going to deploy personnel comprising of the Criminal Investigations Department (CID), the Operations Support Division (OSD), the Family Support Unit (FSU), the Integrated Intelligence Service (IIS) and General Duty (GD) officers. I am going to make such a deployment because I know Bunumbu is a very extensive community and Police presence could help to mitigate crime and a lot of other anomalies”. If there is a way, he continued, ‘I am thinking of constructing a Police Barracks to make the deployment more comfortable for Police Officers’, the IGP assured.

He thanked PC Dr. Shamsu for such a gesture and requested him to recommend ten (10) suitably qualified young men and women within his chiefdom, who will be enlisted in the next Police recruitment, so they would form part of the officers to be deployed to the Chiefdom after the construction of the police station.