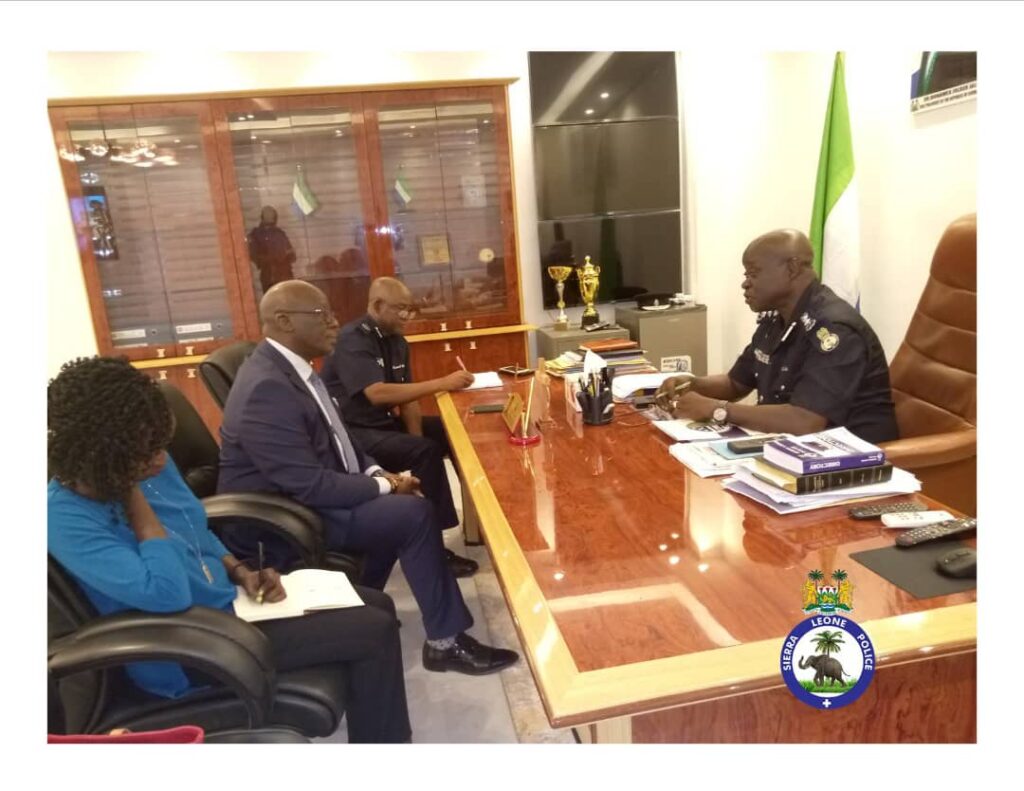 The Geneva Centre For Security Governance (DCAF) has an extended experience in Security Sector Governance and Reform.

DCAF is trying to learn more about the role of the security sector with regards to two pertinent current environmental issues and respective responses. These covers four countries: Sierra Leone, Palestine, Brazil and the Philippines. The project focuses on environmental crime and disaster risk reduction.

Against this backdrop, DCAF team on Tuesday September 27, 2022, held talks with the Inspector General of Police (IGP), Mr. William Fayia Sellu, at his George Street office at Police Headquarters, in Freetown.

The engagement, which focused on identifying concrete entry points where they could work with the Police, so as to build the right governance structures and capacities in these areas.

In her presentation, Anne Bennett, the Head of Division for Sub- Saharan Africa Division, told the IGP that the organisation supports peacekeeping mission process, security sector reforms and also helps to improve on security governance structures. She furthered that the organisation looks forward to working with the Sierra Leone Police on environmental and disaster response issues, climate change, environmental pollution, eco-systems, and preventive mechanisms.

👉 How does the SLP respond to disaster related issues?

👉 What are the preventive mechanisms put in place?

👉 Does the Police work with other MDAs in disaster issues?

👉 What are the challenges in addressing such disasters when they occur?

Responding, the IGP thanked and appreciated DCAF for the timely engagement; adding, that the SLP will always look forward to seeing such engagements and support in future. He said that when it comes to all the issues highlighted by the Team, in the form of questions, that there are government’s institutions and structures put in place, with generic and specific responsibilities to tackle these issues, whenever the need arises.

He mentioned the National Disaster Management Agency (NDMA), Office of National Security (ONS), Environmental Protection Agency (EPA), and the Ministry of the Environment (MOE). But that in all of these, the IGP noted that the Police is key and pivotal in working with them in terms of response and preventive measures.

IGP Sellu cited SLP’s response and preventive measures at the Mile 13 Guma Dam; noting that there are Police deployments there to prevent the felling of trees and the construction of houses around the vicinity of the dam.

Mr. Fayia Sellu also spoke about the Police’s engagement and responses in other disasters such as the recent mudslide at Looking Town, at the East end of Freetown – a disaster which led to the death of 6 people, and some other parts in the Western Area.

Other notable disaster responses the police are engaged in, have to do with curbing illegal mining in riverine areas. That offenders are usually arrested and charged to court; given that their illegal activities do lead to environmental and river pollution.

The Police, according to the IGP, also assist the forest guards in the fight to prevent illegal logging of timber in forest reserve areas; confirming that the Police most times undertake massive operations to address the menace.

On the educational front, the IGP said that through the Community Relations Department of the Sierra Leone Police embarked on huge sensitizations geared toward addressing environmental disaster issues and measures to prevent same. He added that the public are also sensitized on the negative effects of having human settlements in and around water catchment areas.

Speaking on the SLP’s challenges, the IGP said that non-cooperation and synergy between the Police and MDAs are affecting effective coordination and execution of mandates. He therefore called for collaboration and coordination with line ministries, department and agencies directly responsible to tackle natural disasters.

Another challenge, he noted, was people’s deliberate act of constructing settlements in disaster prone areas; and that in spite of efforts to relocate them, they would always come back to live in these areas. He cited places like Mortomeh and Kroo Bay, among others.

Concluding, the IGP reaffirmed his commitment to work with the team and called on them to offer help where they could in mitigating climate change and disaster, and to also help in capacitating the Police to enforce environmental laws, as part of its core functions.