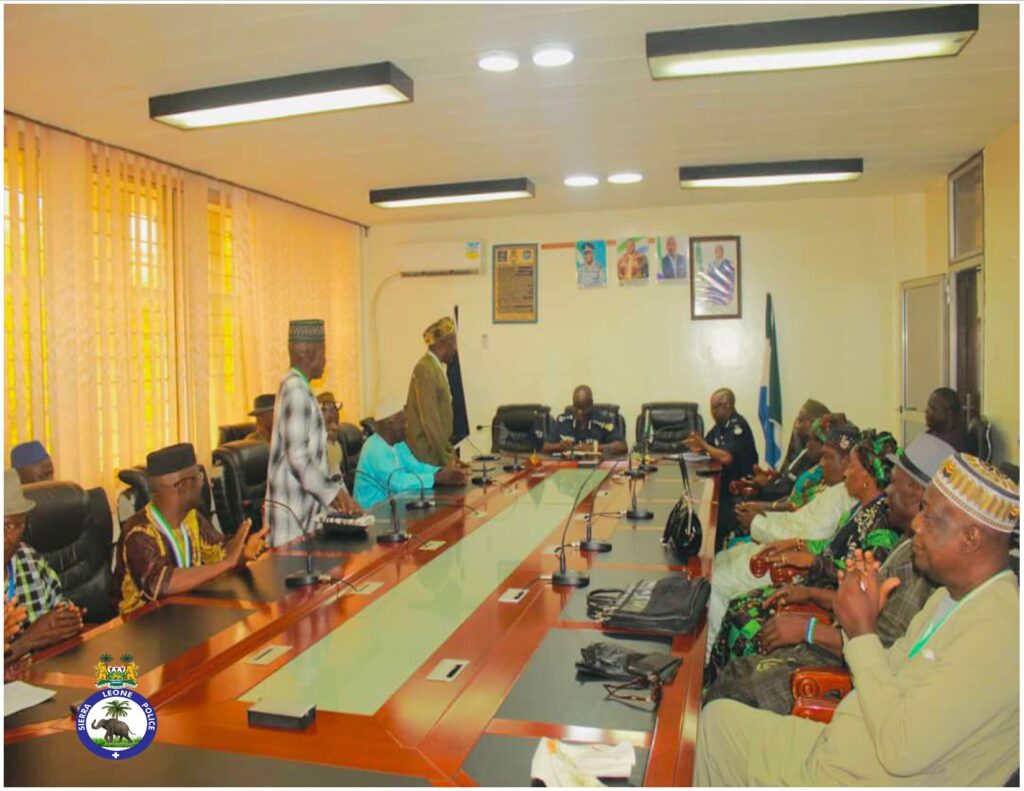 On Wednesday, 9th November, 2022, Council of Tribal Heads in the Western Area met with the Inspector General of Police, Mr. William Fayia Sellu, at Police Headquarters, George Street, in Freetown, to strengthen the existing relationship between the two institutions.

In his opening remarks, the Chairman of the Council of Tribal Heads, Chief S.O Gbekie of the Kono Tribal Head recalled his service in the Sierra Leone Police before he was appointed tribal head of the Kono tribe.

He further revealed that the Inspector General of Police Mr. William Fayia Sellu is the first IGP to be visited by the tribal heads; noting, that their relationship with the Police should be cordial and friendly in a bid to maintain law and order in the country.

As tribal heads, we have always worked in partnership with the LUCs in our various communities; therefore, we are here to strengthen the same relationship’, he said.

Chief Gbekie appealed to the IGP that the Police should consider not to prosecute minor cases but rather called for such cases to be referred to them (tribal heads) for settlement; adding, that this suggestion could help to remedy the influx of minor cases at criminal court.

Chief Gbekie assured the IGP that the Tribal Heads are ready to work in partnership with the Police and that the IGP should count on their support at any times.

Chief Mathew. J. Young, the Mende Tribal Head who also doubles as the Secretary-General for the Council, while making a statement, congratulated the IGP on behalf of the Council, on his appointment as the new Police boss and wished him God’s directive.

He also informed IGP that the Tribal Heads at Western Area are ready to collaborate with the Police to maintain peace in the country especially when the electioneering period is drawing closer. “The effectiveness of the Police depends on good information sharing to help in fighting crime and the maintenance of law and order,” Chief Mathew noted. According to him, Police Officers have always been cooperative in rendering support to them whenever issues arise in their communities, and he assured the IGP that the Council of Tribal Heads is willing to work with him effectively to ensure that youths are sensitized in relation to drug abuse and criminalities in various communities.

In response, the IGP informed the Tribal Heads that he was pleased for the visit and that it is easy to work with community people through community tribal chiefs.

The IGP reaffirmed that he recognises them when it comes to the maintenance of law and order in society; noting, that the chiefs know most of the important people in their various communities either good or bad.

Mr. Sellu assured the tribal heads that a memorandum of understanding will be issued for the attention of all Local Unit Commanders; urging them to identify and work with tribal heads or chiefs in their various Divisions, so as to ensure their full participation in the maintenance of law and order.

He also reassured the Council of tribal heads that LUCs should refer minor cases to community chiefs, especially for cases that do not have much criminal bearing to be dealt with.

In conclusion, the Inspector General of Police called on the tribal heads to help the Police in discouraging the abuse of drugs by young people in their communities. He urged the tribal chiefs to caution their youths about the rampant abuse of a drug called ‘KUSH’, which, he said, is currently ravaging the health and dampening the future of our youths in society.