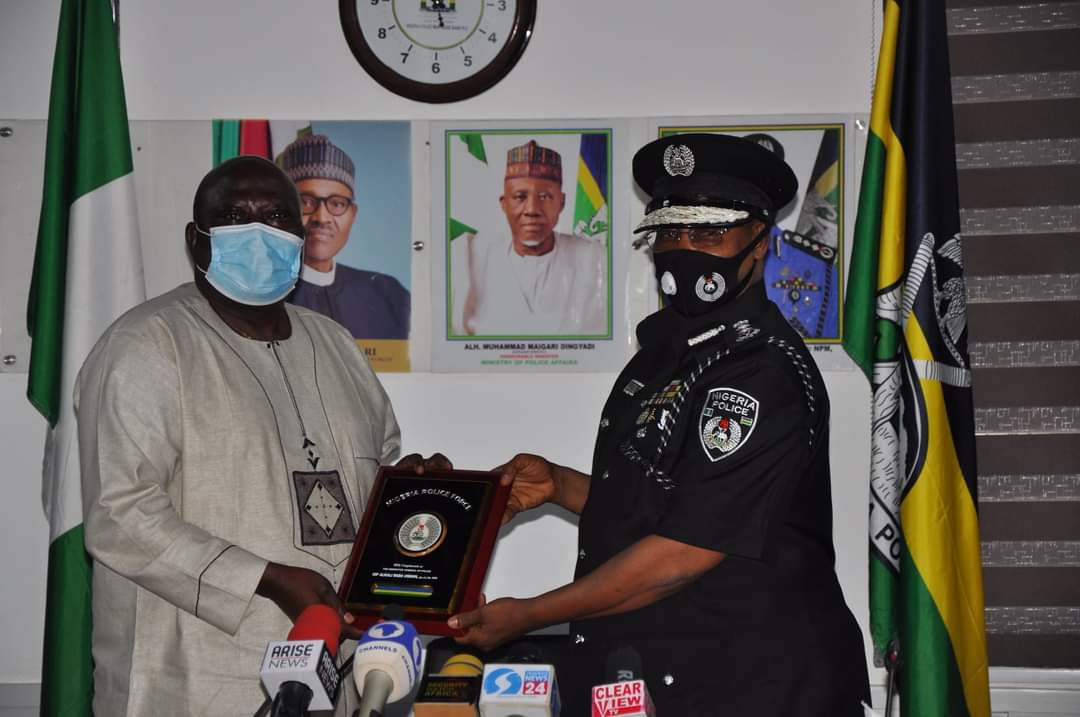 The Inspector-General of Police, IGP Usman Alkali Baba, psc (+), NPM, fdc today, 17th August, 2021, signed a Cooperation Agreement with his Sierra Leonean counterpart, Dr Ambrose Michael Sovula at the Force Headquarters, Abuja. The Agreement was signed in a bilateral policing engagement, targeted at deepening and consolidating relationship between the NPF and the Sierra Leone Police (SLP) in core areas of policing such as manpower development, intelligence sharing, tackling regional and transnational threats and crimes, amongst others. The Inspector General of Sierra Leone Police is on a five-day working visit to the Force Headquarters, Abuja led by the Minister of Internal Affairs, Republic of Sierra Leone, Mr. David Maurice Panda-Noah.

IGP Alkali, during the meeting, noted that “crime is dynamic especially in planning, perfection and execution, and increasingly resonating beyond the borders where it is committed”. As a panacea for the threats, IGP Alkali advocated amongst other things, “the need for continuous bilateral police cooperation and network to successfully confront regional security threats”. The IGP stated that the Nigeria Police Force has a historically unique relationship with the Sierra Leone Police especially in the area of capacity building. He noted for instance that in 1996, the NPF offered slots for the training of seven (7) Sierra Leonean cadet officers at the Nigeria Police Academy, kano. The IGP proudly observed that amongst the officers trained at the time, are AIG Ahamdu Mannah, the current Director of Operations in the Sierra Leon Police and CP Austin Kaile, the current Police Commissioner for the African Mission in Somalia (AMISOM). In addition, IGP mentioned that ten (10) Senior Sierra Leonean Police officers are part of the course participants currently attending the Strategic Leadership Command Course at the Nigeria Police National Institute of Police Studies, Abuja.

On his part, the SLP Boss, appreciated IGP Alkali for approving the participation of ten (10) Senior Sierra Leonean Police officers in the ongoing Strategic Leadership and Command Course at the Nigeria Police National Institute of Police Studies, Abuja. He commended the leadership of the NPF for the collaboration especially in the area of training and capacity building and expressed his belief that it will enhance the strategic management and operational visibility of the Sierra Leone Police.

The Minister of Internal Affairs, Republic of Sierra Leone and leader of the Sierra Leonean delegation, Mr. David Maurice Panda-Noah, in his remarks, expressed the appreciation of the Government and People of Sierra Leone for the collaborative relationship between the two Police organizations. He affirmed that the synergy has indeed impacted positively on policing services in Sierra Leone. He expressed hope that the signing of the Cooperation Agreement would enable both countries perfect a Memorandum of Understanding that would help evolve a formidable policing collaboration between the two West African countries.

Meanwhile, IGP Alkali has reiterated that the Nigeria Police Force would sustain valuable relationship with other Law Enforcement partners within the West-African region and across the globe towards enhancing policing exchanges and staging common regional front in tackling crimes and criminality and improving public safety and security. The bilateral policing engagement also had in attendance, the High Commissioner of the Republic of Sierra Leone to Nigeria, H.E, Dr. Solomon Momoh Christopher, members of the NPF Management Team, Senior Officers of the Nigeria Police Force and other Members of the Sierra Leone Police delegation.