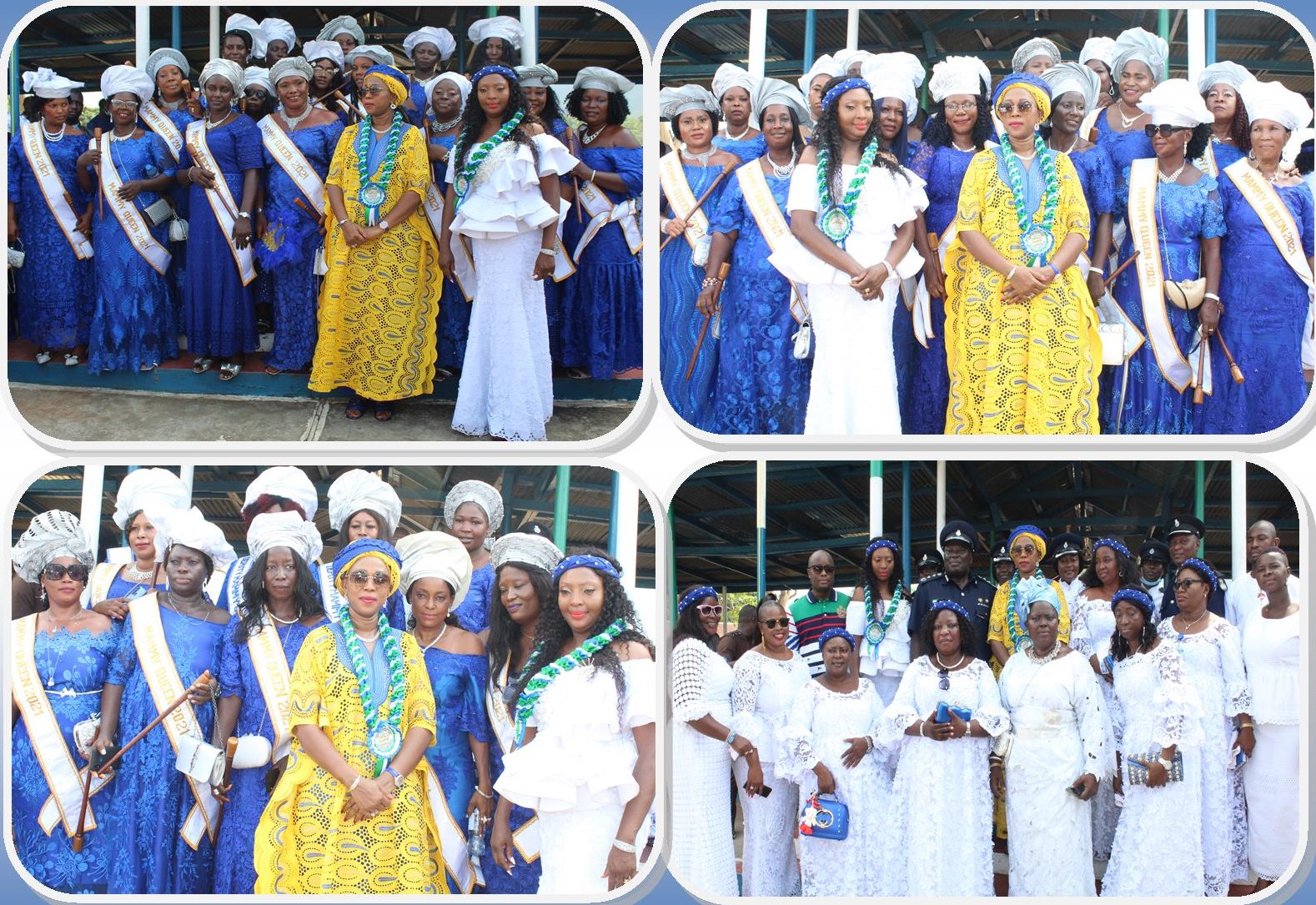 The President of the Sierra Leone Police Wives Association (Mrs. Hawa Angela Sovula) together with the First Lady (Mrs. Fatima Bio) have inaugurated a total of 47 Barracks Mammy Queens at the Sierra Leone Peacekeeping and Law Enforcement Academy SILEA), Hastings Campus. The ceremony, which took place on Saturday 4th December, 2021, attracted a galaxy of dignitaries including the First Lady of the Republic of Sierra Leone in the person of Mrs. Fatima Bio, the Minister of Internal Affairs (Mr. David Maurice Panda-Noah) and the Inspector General of Police (IGP) – Dr. Ambrose Michael Sovula.

Explaining on the reasons for the elections when giving the Welcoming Address, the wife of the IGP narrated that she had always wanted to run a “well administered Association with vigilant Mammy Queens and Deputies” since she took up office as president of the Association sometimes last year. The inauguration ceremony came as a result of the just concluded Barracks Mammy Queens elections which were conducted by the Association at various Police Barracks across the country few months ago. In her statement, Mrs. Sovula noted with clarity as thus:

“Some months ago, I tasked all police wives in various police barracks to come together and elect for themselves who they believe will represent them well to serve as their Mammy Queens and Deputies because it had already been time for Mammy Queen elections. It is as a result of that election we are gathered here today to crown our newly elected “Barracks Mammy Queens” together with their Deputies.”

In her address, Mrs. Sovula encouraged the newly elected Barracks Mammy Queens to ensure unity prevails among members of the Association in their various barracks. She admonished them that their colleagues must have identified some qualities in them before they elected them to serve in those capacities. As she encouraged them to be more productive in the offices they have occupied, Mrs. Sovula asserted that they now have a bigger responsibility to find solution to local problems and settle minor disputes among members. She discouraged them from setting up “Cabals” which according to her will divide the Association.

As she closed with the Welcoming Address, Mrs. Hawa Angela Sovula highlighted the successes they had made so far within the short time of her leadership. She noted the extension being made on the Police Wives Association Vocational Training Center at Kingtom in which they are currently training 250 students including physically challenged persons [freely] on Adults Education, Construction, Tailoring, Catering, Solar Installation and Masonry; the pure drinking water project which had been completed in four police barracks: Kailahun, Lunsar, Kabala, and Hill Top; the bilateral relationship established with foreign Police Wives Association – the Nigeria Police Wives Association. She also mentioned some challenges like toilet facilities in various barracks, water facility in the remaining barracks, and funds to extend the vocational institute.

The Inspector General of Police (Dr. Ambrose Michael Sovula), in his short statement, strongly cautioned the Mammy Queens that they are not Magistrate or High Courts; thus, they should desist from settling criminal matters. He continued by advising them not to levy heavy fines on minor defaulters as that could result to another community issue.

In his statement, the Minister of Internal Affairs (Mr. David Maurice Panda-Noah) noted that the President (Brig. Rtd. Dr. Julius Maada Bio) has expressed unflinching love for the Security Sector by approving 75% salary increase for 2022. He continued that this love had been extended to the Police Wives Association when His Excellency mentioned that members of the Association should be looked after.

During her keynote address, the First Lady – Mrs. Fatima Bio – called on the newly crowned Mammy Queens to join her in the “Hands off Our Girls” and “Free Sanitary Pads” campaigns. On behalf of the “Julius Maada Bio Women”, Mrs. Fatima Bio pledged the sum of two Hundred Million Leones (Le200m) yearly as support to the Police Wives Association. Additionally, she informed them about the UN Sanitation and Hygiene Project which Sierra Leone (among five other African countries) is set to receive. She promised that Police Barracks are going to be among the first beneficiaries when the project commences. ”For our own Sanitation and Hygiene Project here in Sierra Leone, the Police Barracks will be the first to benefit from it,” she noted.

THE CANADIAN HIGH COMMISSIONER ENGAGES THE INSPECTOR GENERAL OF POLICE

SLP SETS TO GET CENTRAL MOSQUE